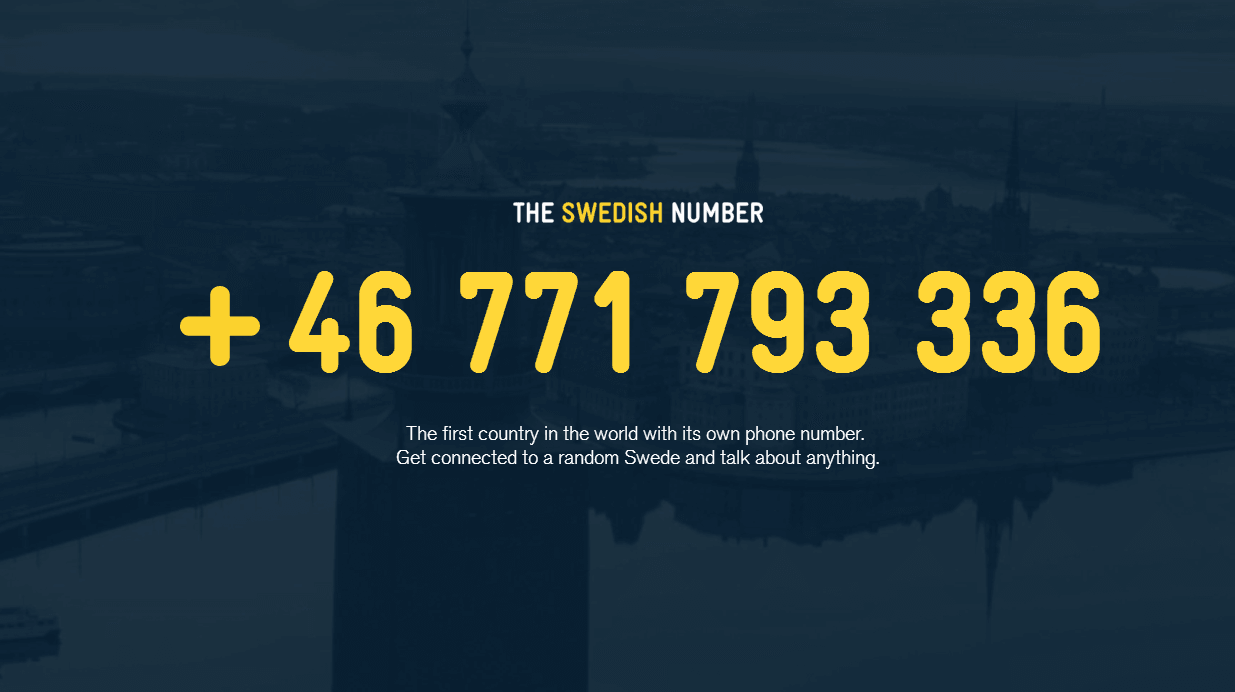 Sweden is a country full of diversity and opinions. To embrace this the Swedish Tourist Association (STF), today, launches The Swedish Number. A number that connects callers to random Swedes to talk about meatballs, nature, northern lights and much more.

Sweden has its very own phone number

In celebration of the 250th anniversary of the abolishment of censorship, Sweden will become the first nation to have its very own phone number and offer everyone the opportunity to learn more about the country by speaking directly to local Swedes. Beginning today, The Swedish Number is open to the world – anyone who calls the telephone number will be connected to a random Swede and have free reign to talk about anything from nature to politics to polar bears.

Using Swedish citizens as ambassadors to answer the calls, the Swedish Tourist Association is aiming to introduce people to the true culture, nature and mindset of Sweden. A video with more information about The Swedish Number can be seen here:

The first country in the world with its own phone number

“In troubled times, many countries try and limit communication between people, but we want to do just the opposite. So instead, we are making Sweden the first country in the world with its own phone number and giving our fellow Swedes the opportunity to answer the calls, express themselves and share their views, whatever they might be,” said Magnus Ling, General Secretary & CEO of the Swedish Tourist Association.

“In doing so we want to show the real Sweden – a unique country worth visiting with the right of public access, sustainable tourism, and a rich cultural heritage. With The Swedish Number, our goal is to create more pride and knowledge about Sweden, both nationally and internationally.”

One of the largest switchboards in the world

To create The Swedish Number, the Swedish Tourist Association partnered with a leading provider of contact solutions, to create one of the largest switchboards in the world that supports incoming phone calls 24 hours a day, 7 days a week. Their cloud-based contact center is used to register ambassadors and connect all calls. The switchboard is designed to randomly choose one of the Swede ambassadors for each call.

How to call The Swedish Number

If your phone keyboard has letters you can dial: +46 771 Sweden.

Even the Prime Minister answers for Sweden

This is what happened when the Prime Minister of Sweden, Stefan Löfven, took calls for The Swedish Number on April 14:

At http://theswedishnumber.com visitors can learn more about the initiative and see the latest statistics on number of calls.