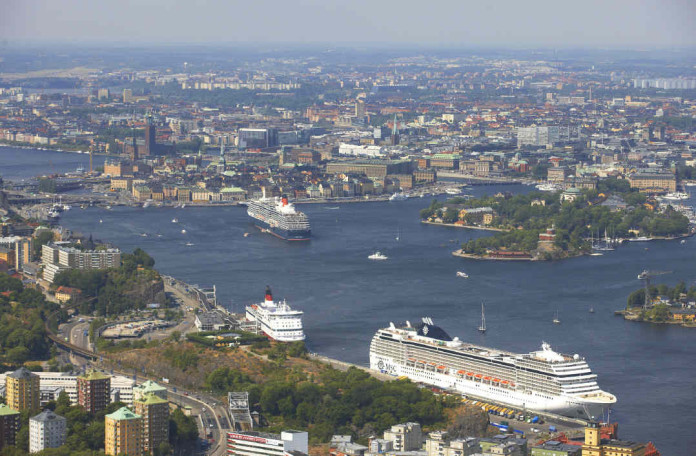 Stockholm is always a delightful experience, whether in summer or in winter. There is plenty to do and to see during your visit. Here are our top twelve must-sees in Stockholm. You can enjoy them all year round.

You will manage to visit two or three of these must-sees per day. However, for excursions to the archipelago and to Drottningholm Palace you will need to calculate with at least a whole day each.

Gamla Stan is filled with sights, restaurants, cafés, bars, and places to shop. The narrow, winding cobblestone streets, with their buildings in different colors, give Gamla Stan its unique character. There are several beautiful museums and attractions here, including the Royal Palace, see next.

The Royal Palace is a rare gem amongst the long list of European palaces. This is one of the world’s largest palaces with over 600 rooms. This baroque institution is open for visitors to witness its regal splendor. In addition to the Royal Apartments there are three museums steeped in regal history.

The Stockholm Archipelago comprises about 30,000 islands, islets and rocks, all of which are easily accessible from the Stockholm city centre. There are tons of hotels, hostels, restaurants and museums spread throughout the archipelago. It is simply the nearest and sweetest city escape.

Skansen is the oldest open-air museum in the world. It was founded all the way back in 1891. Skansen is a favorite among both Stockholmers and visitors. This place is like no other, it is a complex blend of historical buildings, Nordic animals unique to the region, a children’s zoo and an aquatic zoo, also known as an aquarium.

The ABBA Museum displays the music, the clothes, the lyrics, the musicals and the films of the most iconic Swedish band of all time. The museum is modern and designed to give its visitors an interactive, memorable and of course musical experience.

The Vasa Museum is ranked among the top museums in the world and is the most visited attraction in Scandinavia. The mighty Vasa warship capsized and sank in Stockholm 1628. After 333 years on the sea bed, she was salvaged and the voyage could continue.
Today Vasa is the world’s only preserved 17th century regal ship.

Read more: The warship Vasa – A visit to the Vasa Museum

Fotografiska is more than just a renowned photography museum, It is a meeting place and a playground for everything connected to photography. The museum also has an amazing book and souvenir shop and an award-winning restaurant, appointed best museum restaurant in the world. Fotografiska also have a café on the top floor, and the view alone is visual fodder for the imagination.

Moderna Museet presents contemporary and modern art. This is a daring institution. Conventional or “safe” art cannot be found here. Moderna offers a first-class program of temporary exhibitions, children’s workshops, a store and a restaurant with a gorgeous view of Djurgården and Strandvägen. In the same building you will find ArkDes, the architecture and design museum.

The Stockholm City Hall is one of Sweden’s most famous buildings. This impressive building with its ceremonial halls and unique art collection is the official venue of the Nobel Prize banquet, which is held every year on December 10. The City Hall Tower, crowned with its three golden crowns, is the unbeatable protagonist of the Stockholm skyline and it is open to the public between May and September.

Enjoy the beautiful view from Fjällgatan, which is located in the district of Södermalm. Here you are close to the city centre and get a good view of many tourist attractions of Stockholm. Many bus tours stop here.

The Stockholm Globe Arena is one of the most distinctive landmarks of the Swedish capital. The SkyView is a kind of glass elevator with which you can drive on the outer skin of the Globe to its very top. This ride is truly spectacular.

Drottningholm Palace is Sweden’s best preserved royal palace from the 1600s. It is the permanent residence of the royal family and one of Stockholm’s three UNESCO World Heritage sites. The palace features magnificent salons, a beautiful park, an extraordinary court theater and a Chinese Pavillion. In the summer months’ visitors can reach the palace by boat departing from central Stockholm.

More tours? Book now on GetYourGuide:  Tours and things to do in Stockholm

Source: This article is based on material provided by Visit Stockholm; featured image: Per-Erik Adamsson – how many must-sees can you spot in the photo?