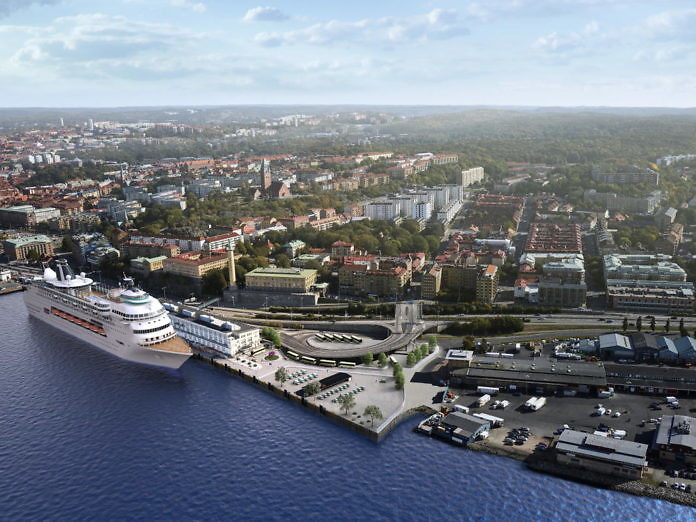 This historic quay is now being resurrected as a cruise reception centre under the name America Cruise Terminal.

Over 100 years ago, the first Swedish American Line vessels sailed for the USA from Stigbergskajen in Gothenburg. This historic quay is now being resurrected as a cruise reception centre under the name America Cruise Terminal.

2017 will be the final season in which cruise ships can dock at Frihamnen. The area will form part of a major urban development scheme with the construction of homes and offices, forcing the present cruise terminal to find a new location.

New location at Stigbergskajen will open 2018

The new central cruise terminal will be at Stigbergskajen in Masthugget. The quay and part of the terminal building, Amerikaskjulet, are currently being restored and will be ready to welcome vessels from spring 2018. The new name – America Cruise Terminal – evokes memories of the terminal’s illustrious past.

“The location is ideal as it is within walking distance of the inviting and vibrant districts of Majorna, Linné and Haga, and just a short journey by public transport or chartered bus into the city centre. Now that the beautiful and historically significant Amerikaskjulet is about to be revived as a passenger terminal, cruise guests can look forward to a warm, and authentic reception,” Jill Söderwall, Vice President Cruise at Gothenburg Port Authority, explained.

Historic Amerikaskjulet will be converted

Amerikaskjulet was constructed in 1912 and operated as a passenger terminal until 1975. The building was then converted into offices, even if the quay was used occasionally by naval vessels and school ships. Part of Amerikaskjulet will now be converted into a reception hall with a tourist information office, souvenir shop and other facilities.

Around half of the ships that call each year in Gothenburg sail under the Älvsborg Bridge and dock centrally. The largest vessels will continue to dock at the terminal at Arendal in the outer harbour area.

Before the inaugural season in 2018, the whole of the outside of Stigbergskajen will be renovated. Ten metres of the quay will be demolished and rebuilt, the bollards will be reinforced, ramps will be constructed and parking spaces for buses will be created.

“It is an old quay – the first quay in Gothenburg for oceangoing traffic – and it is in considerable need of repair and renovation. We are working flat out to have the work completed before the first call in 2018,” said Jill Söderwall.

Seventeen vessels are already scheduled to put into the new America Cruise Terminal.

Amerikaskjulet at Stigbergskajen was completed in 1912 and it was one of the first buildings in Gothenburg to be constructed entirely of concrete. Swedish American Line began operating in 1915 and it was from there that the company’s large transatlantic liners departed.

The arrival and departure of Gripsholm, Drottningholm, Stockholm and Kungsholm were for many years the cause of great public celebration among the people of Gothenburg, who lined the quayside waving banners and flags.

One of the more famous passengers was Greta Garbo, who emigrated to the USA in 1925.

The Swedish American Line was to go on to become one of the world’s leading cruise lines with a very exclusive clientele. Passenger traffic finally came to an end in 1975.

Source and photos: Port of Gothenburg